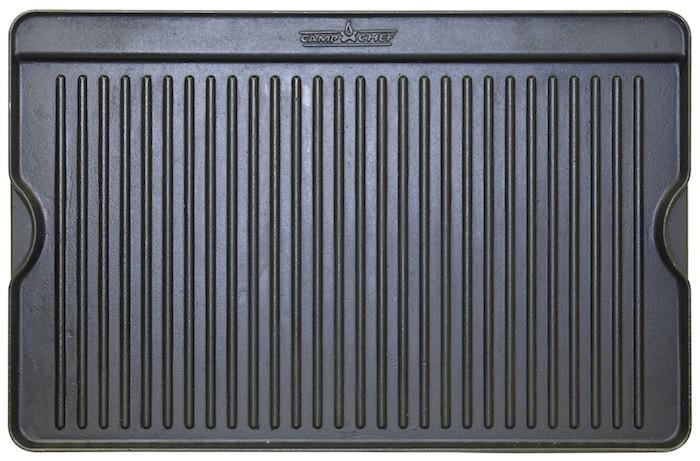 Cook sausage and pancakes for breakfast and grilled burgers for lunch. Versatility and maximizing space is important when it comes to outdoor cooking and the Reversible Cast Iron Grill and Griddle can do it all. This cast iron grill/griddle heats evenly and holds heat well, making it easy to cook your food to perfection. Pre-seasoned with Camp Chef's "True Seasoned Finish," this grill/griddle has a natural cooking surface that is ready to use out of the box.

• Double-sided grill/griddle combo lets you griddle breakfast, then flip it over and grill dinner

• Molded on handles for easy gripping while moving

It works great and is large enough to use on our Tahoe camp stove. We enjoy cooking for large groups while camping with our RV group. This grill/griddle is perfect for that. Thanks for a great product! Ed Masters

What a great griddle! The very first time I used it was on an RV camp out to cook pancakes for 25 people on the new three burner stove we also purchased from you. It will only get better the more we use it. Thanks for the great cookware!

By Richard S. from Washington, DC

The Griddle came with it's own nice carrying bag. It worked great for the pancakes we made this year. It fits the top of my gas grill perfectly. I would definitely purchase this again.

I bought this second griddle because of the satisfaction I have had with the portable three burner grill I have at my second home. This one I use on my $700 grill, especially for fajitas. They grill excellently without drying out and or being burned by flames. It heats evenly and as I get it seasoned more.

By Phil C. from Fairfield, IA

This reversible griddle is wonderful! I have used steel griddles before but cleanup has always be troublesome. This pre-seasoned cast iron griddle provides the same great cooking and cleanup my cast iron skillets provide only a much larger cooking surface.

By Jphn M. from Dallas, TX

How nice to be able to grill shrimp one night and make pancakes the next morning on this reversible grill. The only challenge is getting it cleaned since it is so heavy. But the removable handles helped.

By Timber S. from Kalispell, MT

One of the handle holes in the griddle was not threaded properly. When trying to install the T handle, it was difficult. Then when I backed the T handle out, the threads on the T handle had been stripped mostly off. Poor quality control. 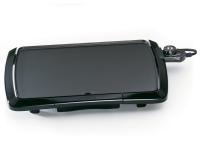 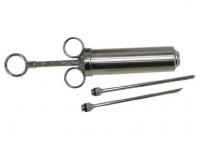 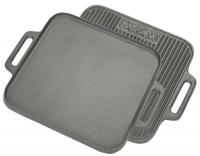 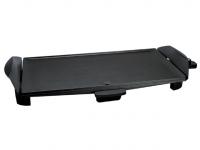