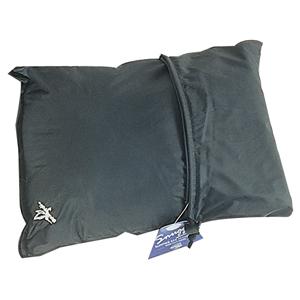 Snuggy's is a practical headrest that packs into its own integral stuff sack. They provide support for head and neck, when travelling or camping.

In 1976 a deep-sea diver and a secretary noticed the US trend for body warmers. They thought the fashion would catch on in the UK and they wanted to be ahead of the trend when it did. Bryony Harris, director of Snugpak taught husband Brett Harris company chairman to sew. Together they produced some experimental body warmers and jackets.

The couple both had full time jobs so every spare minute of their leisure time was spent making as many jackets as possible. With the help of outworkers a cottage industry was born. In those early days production stood at 15 jackets per week.

In 1977 the couple decided to invest what money they had into G & H Products Ltd (which later became Craghoppers) to gain more outdoor business experience. Two years later they made the decision to branch out on their own with Snugpak. Although still making jackets they realised that if the company was going to be a success they would need to manufacture products with year round appeal rather than the seasonal body warmer. Sleeping bags were the logical option.

In 1982 Snugpak leased modest premises in Silsden, installing a quilting machine which could follow patterns of jackets in all sizes as well as sleeping bags. Brett holding down a full time job as a medical sales rep spent every spare moment quilting enough fabric to keep their sole machinist busy for a week at a time.

By 1984 the company had grown and the number of machinists had risen to seven. By 1986 sales had grown so strong the company had to move to larger premises. The company moved down the road to a Grade II listed old woollen mill in Silsden, where they remain.

Brett knew that the way forward for the company was through innovation. Man made sleeping bags was traditionally bulky. He wanted to produce a cheaper man made equivalent to the down filled sleeping bags.

With the help of a Swiss company Neidhart, Brett created Softie wadding, a fibre which was exclusively produced by Neidhart for Snugpak. To compliment this lightweight fibre, Snugpak used lightweight Pertex fabric manufactured by Perseverence Mills of Lancashire, England. In 1987 Snugpak launched their first Softie 6 and 12 bags in the outdoor trade. Their two bags were the smallest synthetic bags in the market and sales rocketed. Today the Softie range consists of six different models all based on this initial idea but constantly upgraded as new technologies are incorporated to keep the bags at the cutting edge.

The latest innovation includes 'profiling', Snugpaks name for its 'No Stitch Through' construction technique which dramatically reduces the cold spots within sleeping bags.