The History of Picnics

'Picnic' began life as a 17th-century French word  it wasn't even close to being an American invention. A 1692 edition of Origines de la Langue Françoise de Ménage mentions 'piquenique' as being of recent origin marks the first appearance of the word in print. As for how the French came by this new term, it was likely invented by joining the common form of the verb 'piquer' (meaning "to pick" or "peck") and a nonsense rhyming syllable coined to fit the first half of this new palate-pleaser.

The first documented appearance of the term outside the French language occurred in 1748, but it was 1800 or thereabouts before anyone can prove it made it into the English language. Even then, it still wasn't in America  it was in England.

Originally, the term described the element of individual contribution each guest was supposed to make towards the repast, as everyone who had been invited to social events styled as "picnics" was expected to turn up bearing a dish to add to the common feast. This element was picked up in other 'picnic' terms, such as 'picnic society,' which described gatherings of the intelligentsia where everyone was expected to perform or in some other way contribute to the success of the evening.

Over time, the meaning of the word shifted to emphasize an alfresco element that had crept into the evolving concept of what such gatherings were supposed to be. Nowadays one thinks of a picnic as a casual meal partaken in a pastoral setting, not as a repast enjoyed either indoors or outdoors but which was contributed to by everybody. Modern picnic baskets can be provisioned by only one cook, and no one would think anything of it -- what matters now is the food be eaten outdoors.

By the 19th century, 'picnic' had successfully made this linguistic shift in meaning. Its history (and that of every other word in the English language) is documented in the Oxford English Dictionary. 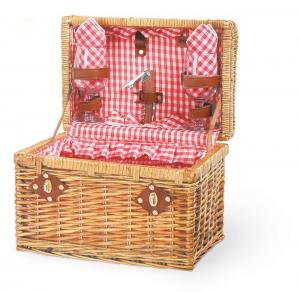